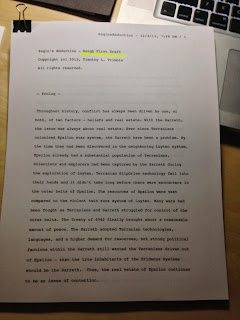 Yep. The blog has suffered a severe bout of neglect. Mostly due to my not wanting to take the amount of time necessary to write and create a new post for it.  With the abundance of my postings to Twitter, Google Plus, and Facebook, I've been relying on my ongoing postings there to make up for what I would normally post on the blog.  Which would usually be my progress with the writing, promotions, and marketing.

As a quick catch up:

My latest social media stats are:


I'm sure that once Azi is done with the edits on ZA that I'll be diving into getting it updated and ready for publication. My plan is to do a single eBook release on Amazon, a combined eBook release on Amazon, and a printed combined release on Amazon (CreateSpace). I'll also do a free promotion on ZI with a link for ZA. And I'll be doing a very short free promotion on the ZA eBook.
While I can't guarantee that I'll be updating the blog any time soon, I can guarantee that you can watch my progress and postings via the other media networks.  You can find me at:

If you're really interested in seeing more Blog postings, let me know how you feel. I do enjoy writing the postings and letting everyone know how it's going. It's just the process of taking a precious hour away from actually doing some story writing that I have a difficult time with. If more folks poke me with a blog stick I might be more prone to post here.

Posted by ascriptor at 5:29 PM No comments: