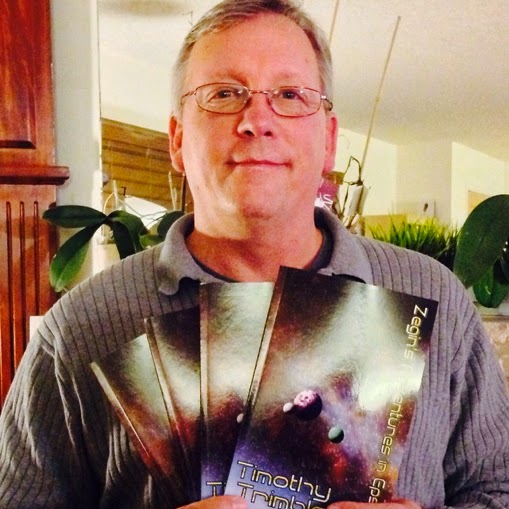 Since the release of Zegin's Adventures in Epsilon (three weeks ago) most of my free time has been taken up with promotions, set up of my Square card reader account, getting my financial tracking spreadsheet configured, and a book reading. Unfortunately, very little writing on Air Born has happened in the past couple months. And for that I apologize to my beta readers and to myself. I feel that the characters in Air Born have been standing around, tapping their feet, with their arms crossed, and giving me "the stare".

Last Sunday I had grand plans of squeezing in some writing time. I sat down at my desk, turned on my MacBook (without looking at it), turned on my PC, and waited for the boots to finish. What? No Wall-E noise from the mac? When I turned to look I was devastated by what I saw. The screen had vertical tracks from water down the middle and a puddle sat on the top of my keyboard. I quickly disconnected the power and called for my wife to bring me a towel for dabbing up the water. After the dabbling with the towel I closed the lid and held the laptop at an angle. I came to tears as I watched the water pour out the USB ports. Knowing that time was critical, I located my micro screwdrivers and removed the bottom panel. I wanted to remove the battery but I didn't have the special 3-nib screwdriver for it. Fortunately, I had a unused can of of cleaning duster which I used for pushing any remaining droplets off the motherboard and various components. My wife and daughter-in-law rushed to grab a trash bag and a large bag of rice. We poured rice into the trash bag and I laid the base cover and the closed laptop on about an inch of rice. I then covered up the laptop with the rest of the rice, tied up the bag tight, and then backed away from the disaster scene. Needless to say, I felt like I had lost an arm the next 31 hours.

After getting home from work on Monday, I carefully removed the mac from the trash bag and examined the motherboard and components. Everything looked dry and there were no scorch marks. I blew out rice kernels and re-attached the base plate. I carefully opened up the lid and attached the power cord. A nice green glow from the plug appeared, as if to console me and say, "It'll be alright." I pressed the power button and held my breath. Two seconds seemed like eternity until the re-assuring Wall-E boot tune sounded. I continued to hold my breath while the white apple appeared and the progress bar slowly danced across the screen. I had to start breathing before I passed out, while waiting for the desktop to appear. Once booted, I ran it through loading various apps, tried printing, and made sure I had internet connectivity. Not a single glitch, scar, or burp occurred any differently than the usual, normal, functioning. I sat there in dis-belief and then got up to do a happy dance, while proclaiming to my family, "It's alive!"

Whew! If this isn't a testimony to the tight manufacturing standards of Apple equipment, then I don't know what is. I'm certain that if this had happened to my wife's Toshiba laptop, there would be no recovery. I'm still blown away that my heavily used MacBook has plodded along the past 5 days without a single hiccup. Apple, if you're listening - Thank You!

(Why do I now think of having sushi when I power up the Mac?)

Autographed Copies
BTW: Thanks to my functioning MacBook, I now have a Square account and I'm taking orders for Autographed copies of Zegin's Adventures in Epsilon. Unfortunately, the link I enabled on this site is not working correctly (I've provided feedback to Google). So, if you're interested in a signed copy, feel free to go to https://squareup.com/market/timothytrimble and place your order. Be sure to include who you want me to autograph it to and any special note you would like me to include.

Future Readings
Once we get into the new year, I'll be scheduling some book readings in the local area. I'm hoping the next will be at Third Place Books in Lake Forest Park. I'll be sure to announce via my normal channels and will post it here once it's scheduled.

Keep on reading and writing, and keep the MacBooks dry.

Posted by ascriptor at 4:18 PM No comments: 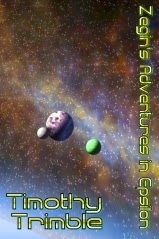 I am excited to finally announce the release of my first science fiction book in print, Zegin's Adventures in Epsilon. It is now available via the Createspace site here. This is a compilation of Zegin's Infection and Zegin's Abduction, with a bonus addition of Zegin's Universe Glossary. I've also added Jezi's Dilemma and a sneak peek of the first chapter from Air Born. It's still a fairly short read at 110 pages, but it's a major accomplishment for me.

Don't be fooled by all those books and adverts which say you can become a writer and publish a book in three easy steps. It's not as easy as it sounds. This was a major learning curve for me. I've mentioned before the importance of having a professional editor and a artist for the cover. Throw in the need for patience and be ready for some frustration while trying to get the printed version of the book to show correctly. After months (yes months) of editing, and then five passes at the cover art, we (my editor/artist and I) are finally happy with the outcome.

Why go with the printed version when I already have these as ebooks on Amazon? There's something about being able to touch and physically hold a printed book in your hands. And I've noticed that when I show people my book on an computer tablet or ereader, they're just not much impressed. Show them a physical book with your name on the cover and their eyelids get raised. It's interesting that the industry is making such a major transition to ebooks when readers still like the look and feel of real paper.

Now, don't get me wrong. I'm not doing this for the purpose of trying to impress people. Okay, maybe just a little itty, teeny, tiny bit. ;) But, I know I won't be taken seriously as a writer until I have something on paper. And having physical books sure makes it easier to schedule a book reading that people are willing to come and listen to, and possibly purchase signed copies. Sorry, but it's pretty hard to autograph a ebook tablet. People get mad when you scrawl your name with a sharpie on their device.

This is also a tool for building my market. I have a lot of plans for having a significant market by the time my full length YA novel "Air Born" is completed. Zegin's Adventures helps me to grow that market. And after Air Born is done the next in the series of Zegin's Adventures will be started on. Yes, I have a ton of storylines already in my mind. Oh, and did I mention my intention for a book called "The Facility", and then there's "Eloquence", and "Love Letters from Mars". Whew. If only I had more time for writing. (Any sponsors out there?)

My first book reading is coming up this Sunday. I'll be reading from Zegin's Adventures at the Cafe Lovure in Edmonds, Washington on 12/14. The readings begin at 3pm. Feel free to stop by and say hello. Hopefully, I'll have some books available for signing as well.