Confessions of a Writer

Well, it looks like I've been tagged for an interview. Here goes: 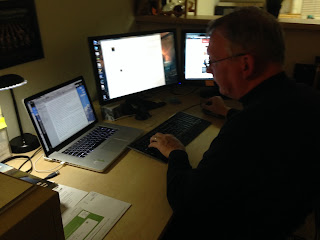 When did you first start writing? Was being a writer something you always wanted to be?
It was as a journalist on Traparia till I wrote a scathing article about an alien who became the local mayor. Due to the resulting death threats, I teleported to Earth and decided to start writing fiction stories while masquerading as a junior high student. A writer is what I always am! I’ve always thought of myself as a writer, even before I finally was published. I did get a bit sidetracked for awhile with family and a stint as a performing musician, where my writing itch resulted in a bunch of music. Now that I’ve gotten past the whole rock star persona, I’m back to creating fantastical worlds and characters through story telling.

What genre do you write?
Initially, science fiction, since that’s the type of reading I devoured as a Traparian, er, a junior high student. But I’ve also become enamored with young adult urban fantasy. I figure most of my writing from here on will bounce between the two genres.

Can you tell us a little about your current work in progress?
I just completed a novel called "Air Born", which is a YA Urban Fantasy story about a secret race of people who live among us, who have the ability to fly. It’s currently sent out to a literary agent for consideration. If they pass on it, I’ll be publishing it independently. I currently have another short story in the works called The Pendant, and I’ve started on the outline for the Air Born sequel, called “Air Storm”.

What was your first piece that you can remember writing? What was it about?
I can’t remember the title, but it was about a teenager who stumbled across a rock in his parents closet. His father had disappeared months before. When he held the rock he shrunk down to sub-atomic size, to a world smaller than a molecule. That’s where he starts looking for his father. Unfortunately, I never finished the story, but it was a great start.

What’s the best part about writing?
I absolutely love creating the characters, the environments, the background stories, and the outline for the story. Once it’s all mapped out, I dive into the actual writing, which I also love since I get immersed into the characters and their situations. It’s like watching a movie unfold inside my head.

What’s the worst part about writing?
Personally, not having the time to do all the writing I want. Since I work a full time job, have family, and I do volunteer community work, it’s a challenge finding the time. I have so many stories mapped out and not enough time to write them all. One of my favorite lines is, "Too much to do. Not enough Tim.” I keep hoping one of the stories will become enough of a hit to allow me to write full time. (The ultimate dream of all writers.)

What’s the name of your favourite character, and why?
Zegin. He’s the main character in my Zegin’s Adventures stories. He most resembles my inner geek. He’s basically a futuristic MacGyver. A spaceship troubleshooter who keeps getting caught up in dangerous situations.

How much time a day/week do you get to write? When is the best time for you to write (morning or night)?
It varies of course. Anywhere from 3 to 10 hours a week. I squeeze it in whenever I can. I prefer a good 1-2 hours early in the morning, before work. But that’s only when I can drag my keester out of the bed.

Did you go to college for writing?
The school of hard knocks. Actually, I dropped out of school at 16. I took the GED test and passed it without studying. I then became a computer programmer for a career. So, no formal training in writing. In hind sight, I wish I had paid more attention in English class. Although, I’ve always enjoyed reading the assigned books. Personally, I have to credit my parents for the inspiration. They bought be a set of encyclopedias which also came with a set of books of the classics - Shakespeare, Aesop’s Fables, Greek Mythology, Lewis Carroll, Mark Twain, and many others. From that point I read everything I could get my hands on.

What bothers you more: spelling errors, punctuation errors or grammar errors?
Punctuation is the source of my nightmares. That’s all I have to say about that. Oh, wait, is the comma in the right place?

What is the best advice that anyone has given you?
Ignore the critics. Write what you want. Keep writing. You can only get better by reading and continuing to write. That’s the only way you can find your voice.

What advice would you give to another writer?
Write, write, and write some more. Any ideas you get - write them down and build on them. Turn off the TV, get off the internet, and focus on your writing. Make it your passion, your desire, your priority, and your goal.

What are your favourite writer sites or blogs that you turn to for help, tips and encouragement?
By far, above all the rest, is Absolutewrite.com. Then there’s the Grammar Girl at http://www.quickanddirtytips.com/grammar-girl
For raw inspiration, it hard to beat the passion and determination of Ksenia Anske.  http://www.kseniaanske.com

Besides writing, what else do you enjoy doing? What are your hobbies?
Every now and then I escape into minecraft. I admit it. It’s my guilty pleasure. Aside from that, hanging with my friends and family keeps me grounded.

Who is your favourite author?
This is really tough. It’s a big battle between Orson Scott Card, Steven Gould, David Brin, Anne McCaffrey, and Larry Niven. Drum roll… I would have to give the torch to Orson Scott Card, for his ability to get me all wrapped up with the main characters.

What are your plans for the rest of the year in terms of your writing?
I really want to wrap up the outline for Air Storm. I have a lot of expectations for the Air Born series. Everyone who has read the first story has given me a lot of great feedback and I’m wanting to live with these characters for awhile.

Where else can we find you online?
Just Google me and it's hard to not find me. Otherwise, I’m on Twitter at @TimothyTrimble, Facebook at \AuthorTimothyTrimble, and my blogging site www.timothytrimble.com

You can also find some of my short stories on www.medium.com/@TimothyTrimble

Thanks to Nicolette Elzie http://nicoletteelzie.com/ for starting this madness and a special thanks to Kevin Ansbro (@kevinansbro) for tagging me via Twitter. You can also find a full list of writers who have been tagged from Annelisa Christensen at http://www.scriptalchemy.com/ @Alpha_Annelisa It’s been fun. Thanks for the tag. 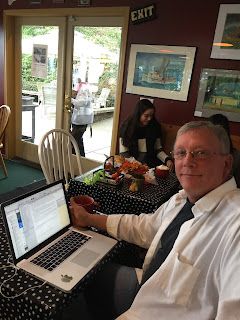 Done!
The manuscript for Air Born is done! It's hard to believe, but I finally did it. 23 months of writing, 18 chapters, 67k words, and a ton of passion and dedication. When working a full time job, doing volunteer work, and taking care of family - it's hard to imagine being able to find the time to write a novel. I'm proof that it can be done.

However, the task is not done yet. I did the writing and a first pass edit. I've written a query letter and within the past week, I've received one "not interested" and I just turned it around and submitted to another agent today. It could be a couple months before I hear back.

What to do now? Keep on writing! I've already started on the outline for the sequel, "Air Storm." Plus, I have another short story in the works, called "The Pendant".


(Picture: Pleased to have typed "The End" at Red Cup Coffee in Mukilteo)

Short Stories
Speaking of short stories, I decided a few months back to utilize medium.com as a platform for hosting my stories. Instead of seeking to submit these to various publications, all while trying to crank out a novel, I decided to post these as freely available for reading. It's my way of giving back to the fan and writing community. Plus gain a little free exposure for my stories. You can find these at www.medium.com/@TimothyTrimble. Enjoy! Recommendations are greatly appreciated.

Social Networking
One of the reasons this blog has seen so little love, is due to my ongoing postings via Twitter, Facebook, and Google Plus - mostly on Twitter. I'm amazed, and thankful, for the fan base that's starting to build on Twitter. Anything I post about Air Born with #YA and #Urbanfantasy tags gets retweeted by a devoted group of followers. I personally have almost 5400 twitter followers. Which is not bad for almost 3 years of effort to grow my followers. The big surprise, however, is with the re-tweets. Thanks to the fans re-tweeting, my postings about Air Born are reaching over 300,000 twitter accounts. Wow!

It's Social Networking - Not Social Selling!
If you're following me on twitter, you know that I'm not interested in trying to hard sell my books or stories. I totally believe in using the social networking platforms for establishing relationships with my followers and letting them discover who I am as a writer. Personally, I don't appreciate it when I follow another author and I immediately get a direct message from them, asking for me to check out their book. Now, I will admit, I've personally purchased a couple books due to finding out about them via the twitter postings. But, I still not appreciate the feeling of the only reason someone engages me on Twitter is so they can start advertising to me.

I also make it a point to thank each and every single one of my followers. Originally, I did this via a tweet. But, I felt it was pretty annoying for my other followers to see a blast of 20+ new thank you messages show up in their feed on a regular basis. So, now I thank my followers via a direct message. It's more personable and less of a "spammy" posting.

Air Born Plans?
While I'm making a couple attempts to seek representation from an agent, if it doesn't pan out, I'll be taking the indie route. While I do prefer the control and flexibility presented by independently publishing, I just don't have the time to conduct the level of marketing and promotions necessary to make an indie title succeed. I could be wrong about that however. I'll test the waters with a few queries. If that doesn't pan out, I'll turn Air Born over to my personal editor, spend a few months doing the edits, and then publish via eBook and Print-on-Demand.

I do have plans for introducing something new into the book which I've not seen done before. Kind of  a integration of another supplemental media for setting the tone and mood of the story. I'm not quite ready to announce this yet, but I hope it's groundbreaking and will raise the bar for indie publishing, and interaction with the fans.

Well, that's my quickie blog posting for now. I hope to do some more postings in the near future with progress of Air Born and the sequel.

Posted by ascriptor at 9:20 PM No comments: