Announcing "Air Born - Do You Dream of Flying" 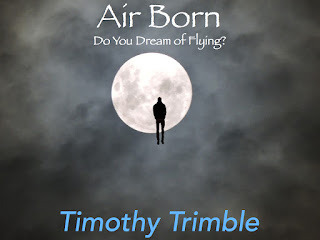 Well, you may or may not have heard that I finally wrapped up the writing, editing, and formatting of Air Born. Whew. What a project. I poured so much effort, emotion, and passion into this story. I wanted to make sure it would touch the inner being of those who read it.

Based on the feedback I've received from the beta readers (who have so kindly suffered with me through the 1st draft), I think I hit the mark with this one.

You see, it's not just a story. Ever since I was a kid, I would have these amazing dreams of flying. Not just in the sky, soaring among the clouds, but in my house. I would slowly drift through the hallways, into the living room, and the kitchen. I could push off a wall and change my direction, roll my body around in all directions, or just hover still in one spot.

Eventually, I turned this into a short story, for the Edmonds Write On the Sound Writer's Conference. That was almost three years ago. I felt really good about the story. It didn't win anything and there wasn't even a mention of it. Well, with over 300 well established writers, the competition was tough. But, as always, I was excited to share this story with my friends and family. Everyone who read it told me that I "HAD" to turn it into a full novel. Even my editor of the Zegin's Abduction story told me to stop working on Zegin's and get cracking on this one. Wow. Being as tenacious as I am, I had to wrap up Zegin's Abduction and get the Zegin's Aventures in Epsilon book into print first. One thing at a time, right? But, in the lulls of waiting for cover art and print copy for ZA, I had time to start on the outline. It flowed out of me easily. I did major research on ancient Egyptian culture and rulers. I dove into lessons on particle physics. Google Maps became my friend as I scoped out locations around the PNW - especially the University of Washington campus.

Once ZA was in print and out the door. I did a very minor push of marketing for it and then dove into a frenzy of writing whenever I had the chance. I gave up computer gaming. (Sorry, Eve-Online.) Every now and then Minecraft would get a small piece of me. I quit watching football, except for the Superbowl. My only guilty pleasure was Formula One Racing. Even then, I felt bad about the time I was wasting, and not spending it writing. (Keep going Valtteri! You'll soon be standing on the 1st podium!)

My beta readers, and my supportive wife, kept me going. I received amazing feedback about the story and corrections about things I had missed. One friend of mine didn't do email much. So, I actually printed out a chapter for her when it was complete. Little did I know she was holding off on reading it until it was done. But, her husband, who had no interest in Young Adult Urban Fantasy, would get the print out from me when she was not able to meet with me. He started reading it and became hooked. He would ask me when the next chapter would be done. He ended up reading the entire draft before his wife, and gave me very nice praise about the story.

After the first draft, I did a complete re-read, and edit. Whew! What a lot of work that turned into. Well worth it however. I caught some things that the betas didn't. Then I knew I needed to have another set of editing eyes on it. Unfortunately Azy was busy (my ZA editor). The name of one of my old WhoWeAre band mates came up and I threw it his directly. (My most profound thanks to Mark Hammer.) He amazed me at his editing skill in catching the things I though were solid. Especially with some of the action scenes.

Important note to those of you who are self publishing your stories: Always, always, always - did I say Always? Always, use an editor for your work. I've lost track of the number of books I've bought from Amazon for Kindle and quickly deleted after the first chapter or two. Really! There's a lot of poor writing out there and it gives the indie writers a bad name. Do your absolute BEST to deliver a quality story with good writing. Yes, it takes time. Yes, it may cost you some money. It's well worth the effort. That goes for Cover Art as well. Spend the $$, and get it done right. Okay, I digress. (Steps off of soapbox.)

How About Some Music?
A great idea I had while writing, or at least I thought it was a great idea, was to put a QR Code at the top of each chapter which would direct the reader to a YouTube video, or a Spotify link, for playing a song that sets the tone and mood for the upcoming chapter. I even started to build the web redirection from this site to send the reader to the song. I hit a wall with that one. Everyone I spoke with said it was an awesome idea. However, it turns out, any use of someone's music in a commercial interest, is going to take issue with your use of their music. Even if it's a link to their music. I thought about the possibility of doing it anyway. But, the though of getting sued by some ambitious lawyer is not something I would want to deal with.

That being said, there's nothing wrong with me building a Spotify list for the book. So, if you're interested in listening to the music I personally recommend for introducing each chapter, feel free to give it a listen here: http://spoti.fi/23UWSU6

Feel free to let me know what you think of my selection.

So, the big announcement is this: Air Born has been submitted to the Grand Novel Contest on inkitt.com. The contest runs till June 17th and the stories with the most votes gets a publishing contract. I did a lot of research on the inkitt folks before I made the decision to submit it there. My initial plan was to just go the independent publishing route, get the cover done, do the formatting, and post it to Amazon. However, the inkitt folks are serious about what they're doing. They have a lot of funding, they have contacts in the publishing industry, and they have a great process for submitting stories and letting readers provide feedback. I liked the site and I posted all my short stories there as a test. I was pleased with the results. So, I proceeded to do the same with Air Born, and to submit it to their contest.

I'm not holding my breath about winning. But, I do think it will bring some good exposure to the story. I still own the distribution rights and can go elsewhere if it doesn't pan out on their site.

So, this is where I plea comes in. Please give Air Born a look at www.inkitt.com/stories/69552
If you like what you are reading, please give it a vote. And if you're interested in being a part of the Air Born Street Team, give it a shout out on all your social media areas (Facebook, Pintrest, Instagram, Twitter, etc.) Please help me to get the word out. Feel free to let me know via Twitter and/or Facebook that you want to be a part of the Street Team. In return for your efforts, you'll be getting a free autographed printed copy of Air Born. I'm limiting this to the first 30 people who respond. So, please shoot me a note if you're interested.

As an ex-musician, one of my greatest experiences was seeing people enjoy my music, sing along with the lyrics, and meet with me afterward to express how much they enjoyed it. It means that I was able to reach out and bring some temporary joy to others. It is my hope that I can do the same with Air Born.

Thanks again for visiting the blog. I really, truly, appreciate it.

Posted by ascriptor at 9:35 PM