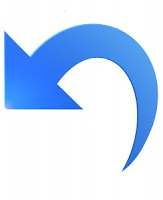 Control Z is my savior!  I've been working on a new short story called "The Wings of Leonardo".  I was using yWriter5 software on my laptop and I was in the heat of creativity.  The thought juices were flowing and the synapses were firing in perfect harmony.  In the middle of a major paragraph, with a total word count of over 1000, everything became highlighted and disappeared.  I was devastated!  I stared at the blank box for what seemed like an eternity.  Normally I use a usb mouse with my laptop.  Not this time - in my rush to crank out some content during my lunch break, I only grabbed my laptop.  No power cable, no mouse.  That was my mistake.  I have an awesome laptop.  A Toshiba.  However, I'm not a fan of the track pad.  It's very sensitive.  While in the middle of madly typing away, a stray thumb - yes, a stray, since I wouldn't in my right mind completely delete my story on purpose - decided to hit the track pad in a way that caused all of my text to be highlighted.  This happened so quickly, that my other fingers (which were behaving themselves) were madly typing away.  This immediately caused the highlighted story to be replaced by the newly entered characters.  Thus, the full disappearance of my story.

After the initial shock washed over my entire mental being, a very well known set of keys suddenly came to mind - CTRL & Z!  I quickly entered the magical keys, not knowing if yWriter5 had the intelligence to know what to do with them.  Success!  I was so happy to see my story reappear that I almost got up to do a dance around the conference room.  Which would have been very embarrassing if one of my work mates had walked by.  Getting my senses, I followed up with a nice Alt-S, to save.  Whew!

Now wouldn't it be nice if we had a Ctrl-Z for those real-life slips, mistakes, and faux pas?  "Yes dear, those pants do seem a little tighter than they used to be."  Oooops - Ctrl-Z!  Whew - saved.  "Hey boss, my favorite show is on tonight.  So, I'll get that report to you tomorrow afternoon instead of the morning."  Ctrl-Z!  Job saved!

Is it too much to ask to have a nice 5 second Ctrl-Z?  Anything over 5 seconds would mean that you were either too slow, too drunk, or too stupid to figure out how to get out of your sticky situation.  In that case all bets are off, and you have to deal with the consequences.  Besides, if you drop a nice luscious chocolate on the floor - don't you get 5 seconds to recover it before it's polluted beyond being edible?  (Crawling babies have no time limits, by the way.)  Any time past 5 seconds makes it totally inedible.  Makes perfect sense to me.

Posted by ascriptor at 9:38 PM